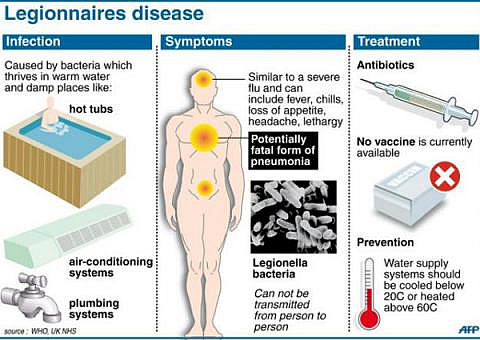 Legionella thrives in environments where water is still and not flowing. In the building world, this means it can be found in central air conditioning systems, whirlpools water-heating systems, humidifiers, showers, hot tubs—and cooling towers.

While Legionella bacteria commonly occurs in cooling towers, it’s usually at such low levels that “it’s not enough to hurt anyone,” says a technical director for Leighton Associates in the USA and a certified industrial hygienist. It does the same in lakes, streams, ponds and many of the other water sources above.

Bacterial only begin to multiply and reach high levels, when water isn’t treated according to proper procedure and is allowed to warm up. Legionnaire’s disease cannot be passed directly from one person to another—it can only be “caught” by exposure to a contaminated source.

Legionnaire’s  Treated According to Proper Procedure

In the context of bacteria and Legionella, a more thorough cleaning using a chemical mixture may be required to kill microbes, adding dispersants (detergents) to lift hidden biofilms from inaccessible surfaces. It may also include scrubbing or power-washing of exposed surfaces in a cooling tower.

This site uses Akismet to reduce spam. Learn how your comment data is processed.